MILAN — The news of Linda Evangelista’s cosmetic procedure trauma has been the talk not only of the internet, where the former supermodel’s Instagram post about what she said were the negative effects of a CoolSculpting treatment has sparked vociferous response, but also at the shows in Milan, where Ms. Evangelista once reigned and where her tale has passed from one socially distanced chair to another like a fashion horror story.

It has raised questions once again about ageism and size-ism in the industry (and society in general), and the continued focus on extreme youth. Because for all the strides that have been made on runways toward diversity in skin color — and there has been real progress — what is increasingly clear in Milan is that when it comes to size and age, very little has really changed.

Indeed, though on the runways of New York there were some efforts to expand the definition of beauty to encompass the true spectrum of body types, in Milan the models are once again very young and very thin. Gigi Hadid is strutting her stuff as a new mother, but generally in the “Wow, you’d never know she’d just had a baby” category.

Like many things in fashion as we emerge from the pandemic (or semi-emerge), it feels like a step backward, rather than a move forward. There is comfort in familiarity, sure, but not this particular kind.

Fashion has long been obsessed by the youth vote and the need to woo generations of consumers yet to come. But that can lead you down some very mistaken paths, as it did at Missoni, where the brand’s new creative director Alberto Caliri (Angela Missoni stepped down as head of the studio in May) seemed to equate the desire for “fresh” and “new” (and TikTok) with a kind of seedy voyeurism.

Old denim was paired with string bikini and scarf halter tops that barely covered the breasts, sections were chopped out of trademark knits to expose the flimsy bra beneath as if outfitting an Amazon for a nightclub jaunt, and halter gowns gleaming with sequins were cut low enough in the back for a permanent flash of G-string. There was nothing empowering about it; more like objectifying. Even the models kept surreptitiously checking to make sure everything was in place.

Missoni is a brand that has always understood the genuinely universal, sensual power of the knit. Some simple column dresses (and some slouchy patchworks shown over cargo pants) did capture that allure. Just not enough of them.

It was a reminder, though, that like many of the clothes on runways here, they would flatter many different kinds of people. Isn’t it about time to show them that way?

Consider, for example, the haute-hippie-on-the-Silk-Road smashups of denim and crochet and maxi dresses, paisley and mandala prints at Etro. Which — crochet tops aside — reference a fantasy owned by no particular personal profile.

Or Emporio Armani, celebrating its 40th birthday, which — despite being known as the “younger” line of Armani — offered up a quasi-retrospective of signature loose liquid tailoring for both men and women, flippy little silk dresses, paillette-strewn evening wear and desert shades that segued into sporty primary colors. (The jade and lilac lamé bloomer rompers that slid off one shoulder, on the other hand, looked like they were trying a little too hard for the young and fun appellation.) It was a telling coincidence that Meghan, Duchess of Sussex, likewise age 40, chose an Emporio black coat for her visit to the Sept. 11 memorial in New York on the same day as the show.

Or even Tod’s, where the designer Walter Chiapponi has added a dollop of sophistication to the brand’s offering. The Jolie Madame neat linen car and trench coats, evening anoraks in jewel-tone sheer nylon and graphic knits would look as good over a pair of slick trousers as the asparagus stalk bare legs with which they were paired on the runway.

Mr. Chiapponi has already nudged the brand beyond its dependence on leather — this season largely reduced to detailing on the elbows and patch pockets of the coats, the neckline of the knits (and some very appealing accessories, especially the padded bucket hats). In part, he said in a preview the day before the show, out of recognition that despite the brand’s roots as a leather house, it had a responsibility to the environment and climate change, and a change of materials was one way to address that.

The result was a move forward. Now it’s also time for another.

Mon Sep 27 , 2021
It’s a good thing that Ugochi Iwuaba took that random message in her Instagram inbox, seriously. It led to the realization of a dream — seeing one of her dresses among the most celebrated fashion designs, at one of the hottest events in fashion, the Met Gala. Iwuaba, CEO and […] 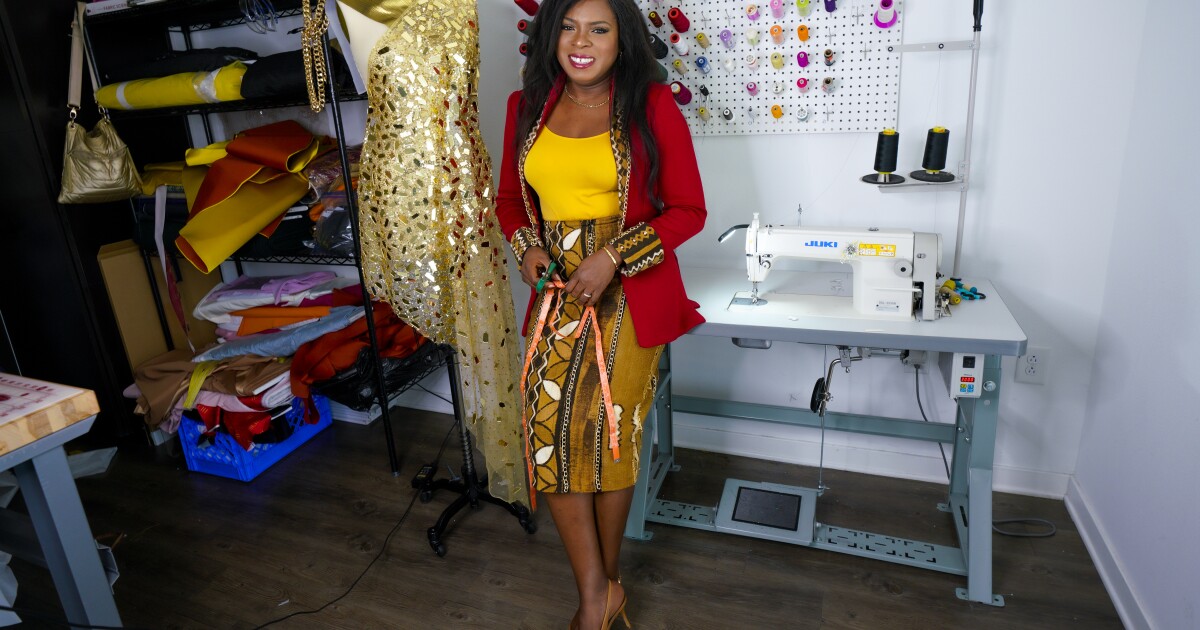