Some items on fashion designer

They are part of a new way of making clothes that attempts to solve a problem bedeviling the fashion industry: Most brands produce too many goods, which leads to heavy discounting to clear unsold items. In addition to hurting the bottom line, the overproduction adds waste as unwanted merchandise ends up in landfills.

Ms. Minkoff doesn’t produce a single item in her eponymous brand’s “sustainably made” collection until a customer orders it, according to chief executive and co-founder

The designer, along with about 25 others, is using a system created by Resonance Companies Inc., one of a handful of on-demand manufacturers and technology providers trying to rethink traditional garment production.

The Covid-19 pandemic highlighted the shortcomings of the established model, which requires brands to place large orders with overseas factories as much as a year in advance. Retailers were stuck with piles of unsold clothes last year, when stores shut temporarily as consumers sheltered at home—pushing some chains into bankruptcy.

“The industry has to change,” said

the chairman and co-founder of Resonance, which has raised $45 million since its 2015 launch. “Brands can’t be stuck making decisions 12 months in advance.”

Resonance prints fabric digitally at its factory in the Dominican Republic. The fabric is then cut robotically into pattern pieces, which are sewn by humans at the Dominican site, at a sewing facility Resonance opened in New York City in September or at another New York plant owned by a third party. Those facilities then ship completed garments to customers in packaging specific to each brand.

Every item is stamped with a QR code that shows how much fabric, dye, water and other materials were used in production, the amount of power consumed as well as who made it and where. Shoppers receive their items one to two weeks after placing orders, although shortages of raw materials have caused some delays recently, Mr. Lenihan said.

“‘When you eliminate the 999 dresses that you would have had to make to sell one, that is where the profitability comes in.’”

have been racing in recent years to shorten lead times to better match supply with demand. But even fast-fashion chains like

AB have at times wound up sitting on piles of unsold goods that dented profits and highlighted the environmental impact of throwaway clothes—so named because many consumers deem them cheap enough to wear only once.

has held a patent for on-demand apparel manufacturing since 2017. While brands from New Balance to Calvin Klein have used the method to customize sneakers and underwear, only a small portion of apparel and footwear is currently made this way, industry executives said. Peerless Clothing International said it plans to use the method for its Hart Schaffner Marx menswear brand starting in October.

Large brands would have to fundamentally change how they design to produce items one at a time, and the standards necessary for making products at scale this way don’t yet exist, some of the executives said. Unlike automobile production, which is mostly automated, apparel manufacturing still requires humans to sew clothes, adding a layer of cost and slowing the process, they said.

Mr. Lenihan said that Resonance’s system is scalable and that the company is looking to automate more of the manufacturing steps.

“‘We aren’t mired by all this inventory that would put us out of business if we didn’t sell it.’”

were a hit when they launched their Costello Tagliapietra brand in 2005. Vogue nicknamed them the “lumberjacks of fashion” for their penchant for wearing plaid shirts, and their jersey dresses were sold in upscale stores like Barneys New York.

“We did all the right things, but we were always treading water,” Mr. Tagliapietra said. They closed Costello Tagliapietra in 2015 and a year later launched JCRT, which sells shirts, trousers, coats and other clothes. Resonance owns 50% of the brand, as well as stakes in other brands that use its system, including Kit and Tucker.

“We aren’t mired by all this inventory that would put us out of business if we didn’t sell it,” Mr. Tagliapietra said. “That’s what really kills brands.”

How do you think the on-demand production model will affect the fashion industry? Join the conversation below.

JCRT is on track to have about $2 million in revenue this year, less than the $8 million Costello Tagliapietra had at its peak. But JCRT is more profitable, the designers said. It has only two employees, Messrs. Costello and Tagliapietra, compared with 15 at their earlier company. Plus, markdowns don’t eat into margins.

“We never go on sale, because we never have excess inventory to clear out,” Mr. Tagliapietra said.

Another benefit of the on-demand model is that it gives brands the option of making some goods domestically, essentially eliminating the time-consuming and expensive effort of shipping goods from overseas factories. That is more appealing now, with skyrocketing shipping costs and backlogged ports.

Ziel Inc. PBC, an on-demand manufacturer of activewear, has a facility in Newburgh, N.Y., that makes items for Everlast Worldwide Inc., Dia & Co and other brands. Gooten, another on-demand player, makes 70% of its orders in the U.S. at 23 factories, from New Jersey to Oregon.

The cost of manufacturing domestically can run multiples of the cost of Asian production. But brands save on shipping and warehousing, while earning more on each sale, because they don’t have to slash prices to clear excess inventory, some of the executives said. As a result, the prices the brands charge consumers are similar to those of goods made the typical way, the executives said.

“By producing on-demand, we are getting equal if not greater margins because we don’t have to discount,” Mr. Minkoff said.

On-demand production doesn’t require minimum-order guarantees, a standard practice at large factories overseas. Even for big brands that can afford the minimums, the system is imperfect because it produces a set number of sizes for every batch. That leaves brands with too many sizes they can’t sell—for instance, too many extra-smalls or extra-larges and not enough mediums, according to industry executives.

“When you eliminate the 999 dresses that you would have had to make to sell one, that is where the profitability comes in,” Mr. Lenihan said.

Tue Sep 28 , 2021
LAS CRUCES – The Emerald Isle Boutique will celebrate its fortieth year in business in October. The boutique opened in 1981, with two sisters at the helm. Jeanette Smith and Louise Burchell started the business as a joint venture to fill a shopping void in the community. Originally offering a selection of lingerie, men’s & […] 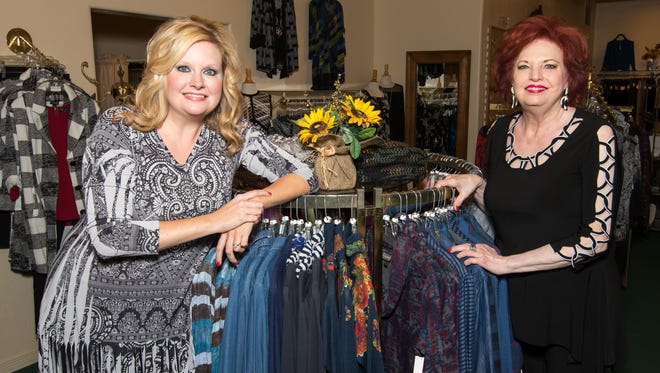