Developer Craig Hall is known for seeing opportunities before others take notice. He pioneered the Frisco office market, turning farmland into a thriving mixed-use park. And back in 1995, he acquired land along Ross Avenue in what’s now the bustling Dallas Arts District.

Hall patiently waited 20 years for the downtown market to catch up; his 18-story KMPG Plaza at Hall Arts office tower opened in 2015 with an impressive roster of tenants. After mulling over various uses on an adjacent plot of land, he decided to do something he had not done before: develop a tower that would house both condos and a boutique hotel.

Craig Hall unveiled his HALL Arts hotel in 2019, saying, “This is the end of a long journey.” Click here to read an article about the opening.

The 28-story building, which made its debut in December 2019, has 48 luxury residences, including a large home occupied by Hall and his wife, winemaker, and former Ambassador Kathryn Hall. The attached hotel—the first in the Dallas Arts District—has 183 guest rooms, including 19 suites, ranging in size from 350 to 1,700 square feet. The property is surrounded by striking venues, including the I.M. Pei-designed  Meyerson Symphony Center, Foster and Partners’ Winspear Opera House, and the Dee and Charles Wyly Theater, designed by REX | OMA, Joshua Prince-Ramus, and Rem Koolhaas.

I’ve known Hall for decades; my twin sister began her real estate career by working for him in Ann Arbor, back when his company was still based in Michigan. So, during a recent stay at his Hall Arts Hotel, I expected it to be sophisticated, modern, bold, and luxurious—without being pretentious. I also knew I’d find plenty of art and thoughtful, whimsical touches—the hotel delivered on all counts.

Spending time in the expansive Grand Finale suite was a true escape—a getaway that made me forget I was less than a mile away from my downtown apartment. Designed by Dallas-based HKS, I basked in the luxurious touches, with interiors by Bentel & Bentel of New York—plush duvets, Frette sheets, Natura Bissè (my fave) bath products, and colorful, massive art-themed photography on the walls. (Longtime Hall curator Patricia Meadows compiled the collection.) I also loved the wallpaper in the bathroom, a photo-realistic swath of crinkled-up light-blue paper. 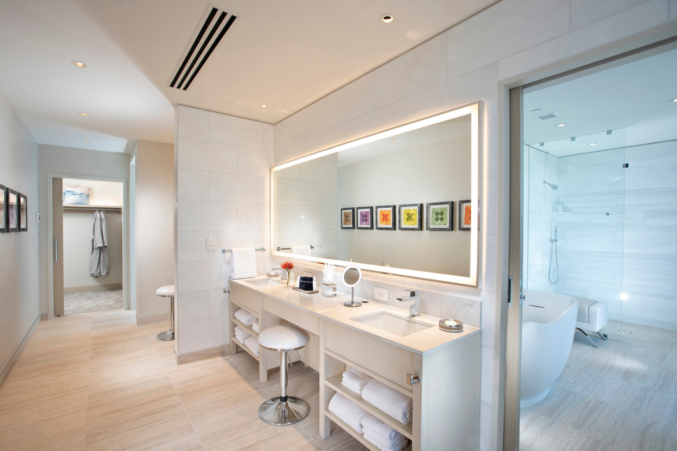 The suite’s large and well-lit bathroom includes a makeup nook and a large soaking tub.

The pros at Bentel & Bentel seemed to anticipate every need, with extras such as a well-lit makeup nook, a dining table that seats six, a perfectly appointed work area, and a collection of interesting books. Despite the suite’s vast size, it never felt overwhelming—just exceptionally comfortable.

Guests don’t need to wander far for a great meal. There are myriad options downtown and in Uptown, including Tei-An, a popular authentic Japanese Soba House a couple of blocks away on Routh Street. But with Ellie’s Restaurant & Lounge in-house, there’s no reason to leave. The eatery offers breakfast, lunch, dinner, and brunch on Saturdays and a poolside dining service on the weekends.

Named after Hall’s late mother, it takes cues from her passion for art and authenticity, offering dishes that are somehow both elegant and informal. With a kitchen led by Executive Chef Dan Landsberg, the restaurant leverages locally sourced, sustainable ingredients.

I highly recommend starting dinner with a glass of the cabernet sauvignon from the Halls’ Napa Valley winery or the Walt (Kathryn’s maiden name) pinot noir. A must-try appetizer is the Duck Confit Tostada, with tomatillo salsa, chile-lime pepitas, chile huarache, Asadero cheese, and goat cheese crema. It was exceptional. Other starter options include Third Coast Ceviche, which features the day’s Gulf catch, and Fried Green Tomatoes with grilled scallion aioli. 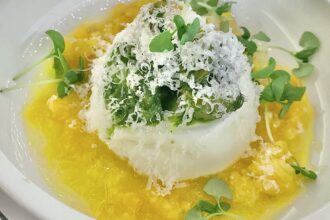 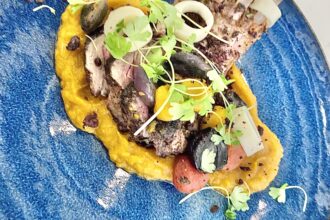 Salads range from a Caprese plate that showcases cheese from Paula Lambert’s famed Dallas Mozzarella Co., a bowl of grains with farro, quinoa, amaranth, sunflower seeds, Texas shell peas, avocado, and more, with a chimichurri vinaigrette. I kept it simple with a deliciously fresh Hearts of Romaine Caesar, with garlic smoked paprika croutons.

For the main course, I opted for the day’s Hook & Reel entrée, an expertly prepared sea bass, while my friend chose the Harissa Marinated Lamb with a sweet potato puree. Both were excellent. We finished the meal by sharing a delicious Key Lime Mousse Parfait with blueberry conserva and toasted graham-cracker crumble. However, the Smores Bread Pudding, Earl Gray Tea Pana Cotta, and Joy Macaron Ice Cream Sandwich were also tempted. 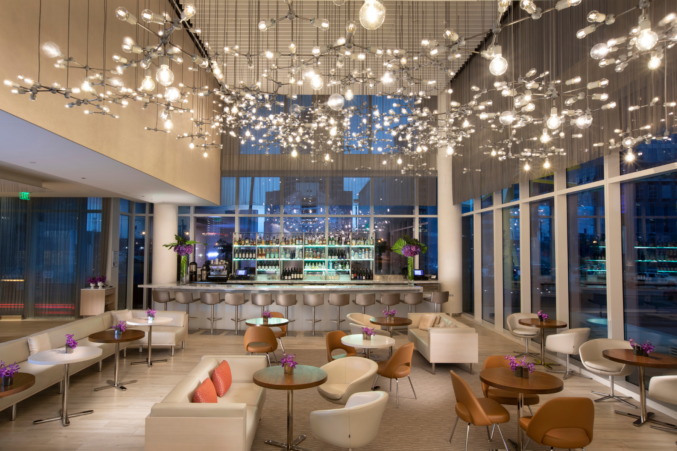 The dining and lounge area is light and bright. It doubles as a mini art gallery, with commissioned artwork by Spencer Finch, Alicia Eggert, Kristin Baker, Cerith Wyn Evans, Carrie Mae Weems, and others. Art is a big part of every Hall development; after he incorporated a robust art collection at his Frisco park, other North Texas developers and property owners were compelled to follow suit. The offerings at Hall Arts are diverse, thought-provoking, and joyful, with works by both established and emerging talents.

Highlights include Spencer Finch’s “Asteroid,” a light installation that hangs overhead in Ellie’s, a piece in the lobby by Scottish painter Alison Watt, and a vibrant untitled floral painting by Clare Woods. The piece I loved the most, though, is a super-cool, red neon-light piece by Alicia Eggert with a message that rotates between “All that is possible is real” and “All that is real is possible.”

Make sure to wander outside and look at the sculpture art found between the hotel and office building, including “Paths,” androgynous human-size figures that climb and sit atop a building, by Icelandic sculptor Steinunn Thorarinsdottir. It’s stunning.

After an incredibly restful sleep, my friend and I took a short walk to Yolk at One Arts Plaza for breakfast the next morning. (Get there before 9 a.m. to avoid the weekend morning crunch.) There are many appealing things on the menu, but I always order the same thing: Very Berry French Toast with a side of extra-crispy bacon. Loaded with strawberries, blueberries, blackberries, Greek yogurt, granola, and honey, the French toast is amazing—and you’ll leave with plenty of leftovers for an afternoon snack.

Later that morning, it was time to be pampered, with exceptional in-room massage by Hiatus Spa + Retreat, partnered with Hall to provide services to guests who book a deluxe room or suite. I kept it traditional, with a Swedish massage and customized aromatherapy; other options include “The Nocturne” (Swedish” and deep tissue massage with reflexology, strategic acupressure points and a sedative blend of lavender, frankincense, and clary sage) and “The Virtuoso” (a bespoke treatment that can incorporate deep tissue, hot stone therapy, full-body exfoliation, stretching, reflexology, and targeted aromatherapy).

Having battled through the worst (hopefully) of COVID, Hall Arts Hotel and its Ellie’s restaurant are attracting a steady stream of guests. Demand surely will continue to accelerate as the Dallas Arts District events calendar fills up. Current offerings include a Van Gogh and the Olive Groves exhibit at the Dallas Museum of Art and Beethoven’s Emperor the Dallas Symphony Orchestra. (A DSO performance with Chris Botti for Oct. 8-10 is sold out.) Click here for a full Arts District schedule of events.

One event that I’m particularly looking forward to is the Dallas Symphony’s C-Suite Christmas, for which I’m thrilled to be a guest conductor. Also participating in this fun, third-annual event are Trammell S. Crow of EarthX, Chad Houser of Cafe Momentum, T.D. Jakes of the T.D. Jakes Foundation, and civic leader Lynn McBee. It all happens Wednesday, Dec. 8, and includes a post-concert performance by Emerald City Band. The program benefits the DSO’s South Dallas Residency, Young Musicians (which provides free instruments and instruction to southern Dallas students in first through fifth grades), and Young Strings programs.

A DFW Staycation: Immerse Yourself in the Arts at this Boutique Hotel

Get up to 75% off accessories

Sat Oct 9 , 2021
Kate Spade may be best known for stylish purses and accessories, but that’s not all that the brand has to offer. It is also a great place to shop for all kinds of wardrobe staples, from sweaters to dresses. And right now, you can score those fashion essentials and more […]